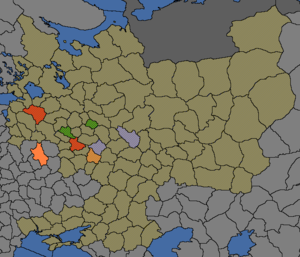 The first target for Yaroslavl needs to be to gain independence from Muscovy. To do this, the player needs to get the support of Poland and ideally Novgorod. As such, they should improve relations with both as soon as possible. It may be necessary to restart a few times, as the ideal conditions are that Poland rivals Muscovy (they may only do that after both gaining their union with Lithuania and beating the Teutonic Order), and that Muscovy does not gain Denmark as an ally. In order to further improve the likelihood of independence support, the player should increase development in their only province once the Renaissance happens, using mostly admin and diplo points. This would allow them to increase their initial paltry force limit of 4 to at least 6 or 7. This will also help in keeping Muscovy from annexing the player.

The best time to start the independence war, then, is when Muscovy is otherwise occupied, having started a war against one of the neighboring Sunni nations. It is recommended to let the allies do the fighting, only support when needed, and take the maximum deal possible, stripping Muscovy of rich provinces such as Moscow and Tver, including as much of Yaroslavl's capital area as possible (while taking care not to antagonize Novgorod too early by taking one of their cores, or several of their claims).

Unless the player finds an opportunity to declare war against a smaller nation (such as Odoyev or Ryazan), the second war will likely also be against Muscovy. This should be after a few decades, once enough favors have been accumulated to call all allies into the war. In that war, the player should go for maximum war score against their enemy, weakening them as much as possible. Depending on the provinces taken, the player may find themselves at odds now with Novgorod. Since Novgorod usually has few friends, they should provide a good target soon after. Aggressive expansion should not be an issue, due to the fact that Muscovy's neighbors are either Catholic, Sunni or too weak to matter.

The next steps should be to secure as much Muscovite and Novgorodian orthodox territory as possible, as quickly as possible. Once that region is consolidated, expansion can continue into Scandinavia, Lithuania and Poland or to the south and east into Sunni territory.

It is advantageous to take administrative ideas as the first or second idea group, as the player will have quite a few relatively rich provinces to core, and can save on admin points early on this way. The other of the first two idea groups will likely be a military one. It is up to the player to decide on which one that complements the Yaroslavian military traditions best. The first diplomatic idea group could be exploration ideas, allowing the player to colonize the East and later the Americas, or possibly influence ideas to lower the aggressive expansion impact and allow for quicker vassal annexation - the player may choose to release and feed vassals in order to save on admin points, aggressive expansion and unrest when conquering the Central Asian Sunni nations.

Due to the likelihood of conquering Sunni territory, the player would likely need to take either humanist ideas or religious ideas to either pacify or quickly convert heretic territories.