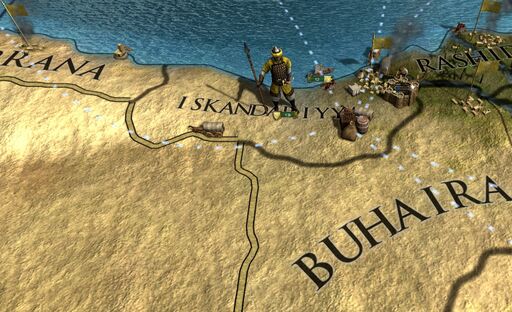 同时也有一些地标建筑（National Monuments I and II DLC）：

每个省份只属于一个地区。Each province belongs only to one area, which belongs to one region and which itself belongs to one super-region (also referred to in-game as sub-continent). Besides being used as scope triggers for other mechanics the system is also used in the Regional Naming mechanic. If a nation owns land which is disconnected from its capital, it will display the nation's name following the location's name (the name of the location depends on its size).

Unexplored areas of the map are known as Terra Incognita (from Latin, ‘unknown land’) and shown as blank, white patches.

Terra Incognita provinces must be explored before they can be traveled across. This can be done by an army led by a conquistador (land) or a navy led by an explorer (sea); units led by these two military leaders can traverse and reveal such provinces. Armies can walk into enemy terra incognita if they are at war, even without a conquistador. However, the same is not true of allied nations, even when at peace, as armies cannot walk through allied terra incognita. Ships sailing past terra incognita will often reveal it if they are led by an explorer. With the El Dorado DLC enabled naval exploration becomes semi-automatic and land exploration can also be done automatically if done in the new world (RotW land exploration still needs to be done manually).

Undiscovered land provinces have a chance per month to be discovered by owners of adjacent provinces - typically taking 3–5 years (Muscovy, however, has an idea that makes this discovery instant). After a certain period of time, an exploratory nation's discoveries will be revealed to other nations. The time between discovery and spread of information is influenced by culture. Generally, a nation that travels near an area often, is in the same culture/tech group as another nation or has good relations is more likely to discover the area.

Random New World is an option that can be selected in the nation select screen. The option replaces everything west of the Azores and Iceland, and east of Eastern Siberia, Wake Island, and New Zealand with new landmasses. Players can chose to generate a New World similar to the existing one or one with fantasy "what if" elements in it. In addition, the RNW is highly moddable and allows players to share their own user-created tile-sets with each other.

Some parts of the world are simply too remote for the technology of this era to ever have reached them effectively, such as the glaciers of Greenland, the Himalayan plateau, the mountainous forests of Papua New Guinea and the depths of the Sahara. Other wastelands, such as the Alps or Carpathian Mountains, exist for strategic reasons. These areas can still be discovered, but are known as Wastelands and cannot be colonized or traversed. They will also show up on the Main Map, so there won't be any holes in the world as the game progresses and the map expands. Once discovered wastelands will remain colored grey, unless the terrain in uncolonized video option is turned on, until a single nation owns over 50% of the provinces bordering it. At that point the nation's color and name will also spread over the wasteland (this option can be turned on/off - on by default).

Generally it is only possible to see activities in one's own provinces, allies' and subjects' provinces, provinces directly bordering yours, and provinces containing or next to your troops (except exiled troops) or ships. Docked ships will show you the province they're docked in and the adjacent sea zone. Beyond this it is not possible to see any unit movements or any province changes on the map. The map becomes shaded as if being shadowed by passing clouds (made more apparent due to the clouds moving shadows). This area is covered by what is known as the Fog of War (FoW). The espionage idea from the

espionage idea group unlocks the ability to infiltrate a foreign nation's administration, which will lift the fog of war from that nation for a duration of 5 years. AI nations banded in war against a common foe have a "combined" line of sight for that nation ().

Note: FoW is very different from Terra Incognita. It is possible to send forces through provinces to see what is within the FoW without needing explorers or conquistadors. 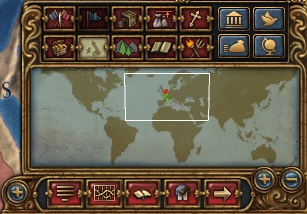 The minimap is located at the bottom right of the screen. Clicking anywhere on this little map will jump to that location on the main map. The white box shows what part of the world is currently displayed on the main map. The buttons along the top of the minimap can be used to access different map-modes that change the view of the main map. On wartime allies' and the country's military units will glow green dots on the map, and enemy units will glow red dots, it is possible to disable this feature on the game settings.

The main map supports a number of different views, allowing players to see the world in specific ways. The player can customize different map-modes as primary-maps which can be easily accessed by clicking on them or with the keys Q to P (the top row of a QWERTY keyboard). The different map modes are categorized into four main map-tabs (blue buttons on the upper right side of the mini-map). To bind a map-mode as a primary map, right-click one of the desired positions (red buttons above the mini-map) and left-click the desired map-mode. Each primary-map can be set to bind further map-modes accessible by cycling said primary-map again (for example: press Q twice to get to its 2nd map-mode and so on).

Note: While it isn't noted below, most map-modes also show information regarding owner, terrain, fort level and fort ZoC.