Victoria II is a grand strategy wargame developed by Paradox Development Studio and published by Paradox Interactive, sequel to 2003's Victoria. It was announced on 19 August 2009 and was released on 13 August 2010.

Virtual Programming published the OS X version of the game on September 17, 2010.

Like its predecessor, Victoria II allows for the player to take control of and manage a 19th-century nation-state including its political, diplomatic, economic, military, and technological aspects. 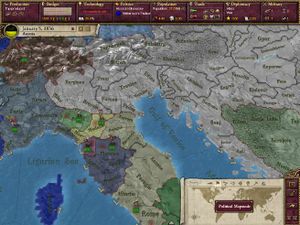 A preview image of Victoria II showing the political map mode, interfaces, and Northern Italy in 1836.

Victoria II spans the globe from 1836 to the start of 1936 with over 200 playable nations.[1] Like its predecessor, Victoria II focuses on internal management, covering the industrialization and social/political changes in a country with dozens of different government types. The game gives a lot of importance to the economy of a country by having a complex market system with over 50 types of goods and factories.[1] While warfare is a component of the game it is not the primary focus as in other Paradox Interactive games such as the Hearts of Iron series.[2]

Nations' populations are divided into cultures, religions, and occupations. There are several different population groups or "pops" including aristocrats, officers, clergy, capitalists, clerks, craftsmen, soldiers, laborers, and farmers. Victoria II introduces two new groups, artisans and bureaucrats. As in other Paradox titles, like Europa Universalis, historical missions that are micro-objectives in the larger game have been added. There are thousands of historical events and decisions as well.[1] These events and nationalist forces can lead to the creation or disintegration of nation states.[3]

Victoria II contains a number of changes and improvements from its predecessor. The interface was streamlined when compared to the original game, which was described by producer Johan Andersson as, "the interface God forgot".[4] Automation of various tasks has been added, including trade and population promotion. The education system has been overhauled by having clergy educate people of the same religion, and each population group now has their own literacy levels. Education and literacy's importance is reflected in the vast technology system that contains thousands of inventions.[1] Additionally, the functioning of ideology in the game was tweaked such that population groups are more sensitive to changes in their country's situation, as well as inclined to agitate for specific levels of political and social reforms.[5]

The economic system in Victoria II attempts to simulate the flow of resources in a world market. Every province in the game produces a resource in resource gathering operations or RGO's.[6] Some resources, such as wheat, are demanded principally by your population. Other materials, like iron, are consumed by industry, but are still tradeable.

The production and unemployment system from the original Victoria has been revised to better reflect market forces. Whereas, in the original the state provided the funds for resources and the player possessed a wide range of options with which to build their economy, provided they have access to the proper raw materials. All resources can be collected or produced by industry. The game also has a cottage production system simulating pre-industrial economies.[1]

Victoria II contains a deep political simulation reflected in the dozens of different types of governments, a new sphere of influence system, gunboat diplomacy and a new election system with coalition governments and senate.[1]

The diplomacy in Victoria II is similar to that of other Paradox titles. Each country has a relation value of –200 to +200 which represents how much they like each other. Diplomatic and in game actions shift this relationship around and it factors into the AI's decisions. However, Paradox Interactive has expanded parts of this system. War goals from Europa Universalis III: Heir to the Throne', an expansion for Europa Universalis III have been integrated though they function in a slightly different way. You can add more war goals as the war progresses, although this does affect your population's temperament. Failure to achieve a war goal will increase population's militancy, which can lead to revolts.

In the game controlling a Great power gives special diplomatic options not available to other countries. Great Powers do not just influence how a country sees them; they have the added ability to use their influence on other countries to change their perception of other Great Powers. The struggle for influence that the Great Powers wage around the world is not a simple bilateral basis but occurs with each other inside different countries, giving an added dimension to diplomacy which was not present in the original Victoria.

Warfare is regarded as a lesser priority than politics and economics in Victoria II, though it follows the basic pattern used in other Paradox grand strategy games, with armies moving between provinces and engaging enemy armies and capturing enemy territory. The basic combat system is a combination of the systems used in Europa Universalis 3, Europa Universalis: Rome and Hearts of Iron III. A key component to combat is "frontage": the number of units in an army at the front line, which decreases as technology improves to simulate the change from roving armies to the continuous trench lines of World War I.[7]

Several aspects of the military have been changed from Victoria. The base unit has been reduced from a 10,000-unit division to a 3,000-unit brigade, which is no longer raised from a national manpower pool but directly raised from a provincial soldier POP, to which the brigade remains connected. A new aspect to the military is reconnaissance. This is a value that gives a bonus (or penalty, if low) to capturing provinces and defeating enemy armies; in prolonged combat, however, the reconnaissance value drops. Units such as cavalry and aeroplanes have high reconnaissance values and are intended to be used as scouts.[7]

There are currently two bookmarks with which you can start a campaign in with a choice of any country in the world that existed at that time. Here are both bookmarks with their respective names and descriptions.

The dust has settled on the fields of Waterloo, where the ideals of the French Revolution were believed to have met their final demise at the hands of the Ancient Régimes of Europe. After the tribulations of Napoleon's wars, the consensus established at the Congress of Vienna has restored a tentative calm to a troubled continent. While the flames of revolution may have been put out for now, the ideas of human liberty, nationalism and liberalism will soon prove themselves more alive than ever. In the Americas, those same ideas threaten to plunge a young republic into the devastation of a civil war. Princess Victoria is 16 years old, and will soon ascend to the throne of Great Britain, the greatest industrial empire ever to span the globe. Her ascension, to a long and prosperous reign, marks the beginning of an age that is to last all the way up until the First World War. In this new era of unprecedented technological progress, doubts will be cast on certainties that have stood since time immemorial, and new dogmas will rise in their place. Far away, across the briny foam, the riches of Asia and Africa, and The Heart of Darkness, beckon that their songs may also be heard, in the Concert of Europe. Maestro, choose your instrument, and let the music play.

The initial date plunges you into the early XIXth Century where only a handful of nations have factories and Africa is empty of countries bar a few on the coast. This date is perfect for building a nation up from humble beginnings so that it might rival history and forge its own destiny.

Civil war rages in North America as the Confederate States attempt to secede from the Union. The outcome is uncertain, but already this promises to be a new type of war as both sides have access to railroads, telegraphs, and repeating rifles. Meanwhile, in Europe, Great Britain is experimenting with the first iron-hulled steam-driven warship, a combination which promises to revolutionise the war at sea. World wide the industrial revolution is gathering speed as more and more nations start to industrialise. The times they are a-changing.

This bookmark revolves around the American Civil War, a much more challenging conflict than in the previous bookmark, since the player has no time to prepare. There is improved technology and a wider variety of countries have industrialised. A later date means that the game is more likely to carry out more historically accurate.

The decision to create Victoria II was influenced by voting on the Paradox Interactive forums and debate within the company. The CEO of Paradox Interactive, Fredrik Wester, publicly announced his belief that the game would never see a profit while other members of the company such as Johan Andersson were confident it would be profitable. To this end Wester promised that if the game did indeed make a profit he would shave his head and post the pictures onto the forum.[8] This belief stemmed from the first game's lackluster sales numbers. It was revealed in a German interview with Frederik that 70,000 copies would need to be sold in order for Victoria II to be profitable.[9] On 17 June, Jessica Chobot from IGN shaved it off for him.[10]

A House Divided (AHD) was announced at the Electronic Entertainment Expo 2011 as an expansion pack with an aim on "[improving the] political and economical aspects of the game, with focus on the American Civil War era". It was released February 2, 2012 for Windows and on March 30, 2012 for OS X, although it is currently only available for purchase by download. It includes:

Heart of Darkness (HOD) was announced by Paradox on 31 January 2013 and released on 16 April 2013. It includes the following features:

GameSpot said that there was much less micromanagement than in its predecessor. The reviewer stated: "Thanks to a friendlier interface and tutorials, Victoria II is a lot more playable and enjoyable than its predecessor."[11]