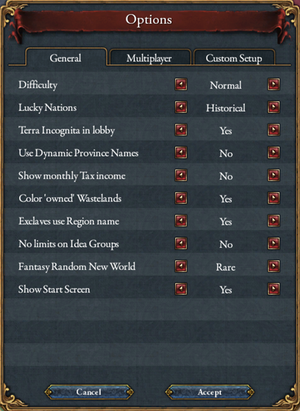 Different Difficulty settings grant different bonuses to Player or AI nations to adjust the overall game difficulty. If set to Normal, no nations will get bonuses. On Easy, the AI is more forgiving towards Players, whereas on Hard it is far more aggressive.

Determines whether or not terra incognita is shown or hidden by default. Not possible with Ironman enabled.

Wastelands will be colored if a country owns a majority of surrounding provinces.

Use region names for Exclaves (e.g. 'Swedish Kongo' instead of 'Sweden').

No limits on Idea Groups

You can pick any idea group, and are no longer limited from picking the same category all the time.

Controls the chance of fantasy elements such as highly advanced Native Empires to appear in the Random New World.

Toggles whether Start Screen with information and background about your country and the region is shown when starting a new game.

If on, players can hotjoin the game, making it a multiplayer game. Not possible with Ironman enabled.

If on, players can control the same country. Not possible with Ironman enabled.

Only host and observer can save

If on, only the host or observer will be able to save a multiplayer game.

Only host can pause

If on, only the host can pause the game.

If on, players can manually edit saved game files between sessions.

If on, players will not be able to open the ledger, preventing usage of it for seeing other countries' armies.

If on, the amout of information given by the ledger is reduced.

If on, scores and victory cards will be reset with every new age.

If on, members in a team can only ally each other and not other players.

If on, every player can create a team in the lobby.

Blocks certain destructive actions by players that have lost a war as long as the truces after that war are in effect.

Determines the amount of points players have available to create custom nations. The more points available, the easier the start.

Determines the base tax and manpower of all provinces. - normal (historical), random or flat(4-4-3) values

Determines what countries will populate the map.

Allow adding Nations to Save Game

Allows adding new Custom Nations after loading a Save Game.

Determines where randomly generated nations will get their names and flags from - dynamic or historical.

Gameplaysettings.txt is a file in the Game folder which contains the settings used in game. The file is listed as below with descriptions of each digit's purpose.